Member of the NGO Committee, Rare Diseases International (RDI), launched a call to Member States and other relevant stakeholders to:

1. eliminate the risk of exacerbating pre-existing inequalities, and

2. protect people living with a rare disease from being discriminated and becoming even more vulnerable in COVID-19 response and recovery strategies, as well as long-term health system restructuring plans.

The statement, which is the result of a process of consultation with RDI member organisations, highlights the impacts of the pandemic on the rare disease community, the role that organisations representing people living with a rare disease have taken on during the crisis, and a series of recommendations to ensure the protection of this vulnerable population.

The 10th edition of the European Conference on Rare Diseases & Orphan Products 2020, took place exclusively online for the first time on 14 & 15 May. It was an unprecedented success with a record 1,500 participants from 57 countries and 100+ expert speakers!

The ECRD 2020 theme “The rare disease patient journey in 2030” recognised that the next decade holds great potential for improvement and that while we cannot predict the future, we all have a role in preparing for it. See the full ECRD programme built around these six parallel themes:

In particular, theme 2 of the ECRD 2020 focused on international policy and looked at rare diseases from a human rights perspective. It was a chance to discuss the paradigm shifts needed to ensure inclusion in society and make the UN principle to ‘leave no one behind’ a reality.

Take a look at the Theme 2 pre-recorded session: Getting our rights ‘right’: An international framework for rare diseases.

This session is publicly available. But also, for the first time ever, you can access all 29 conference sessions, including inspiring speeches from 3 European Commissioners, 2 health ministers and 100+ expert speakers for up to ONE YEAR after the conference, until May 2021.

If you missed the opportunity to join the live online conference, you can still access recordings of all sessions by registering here. 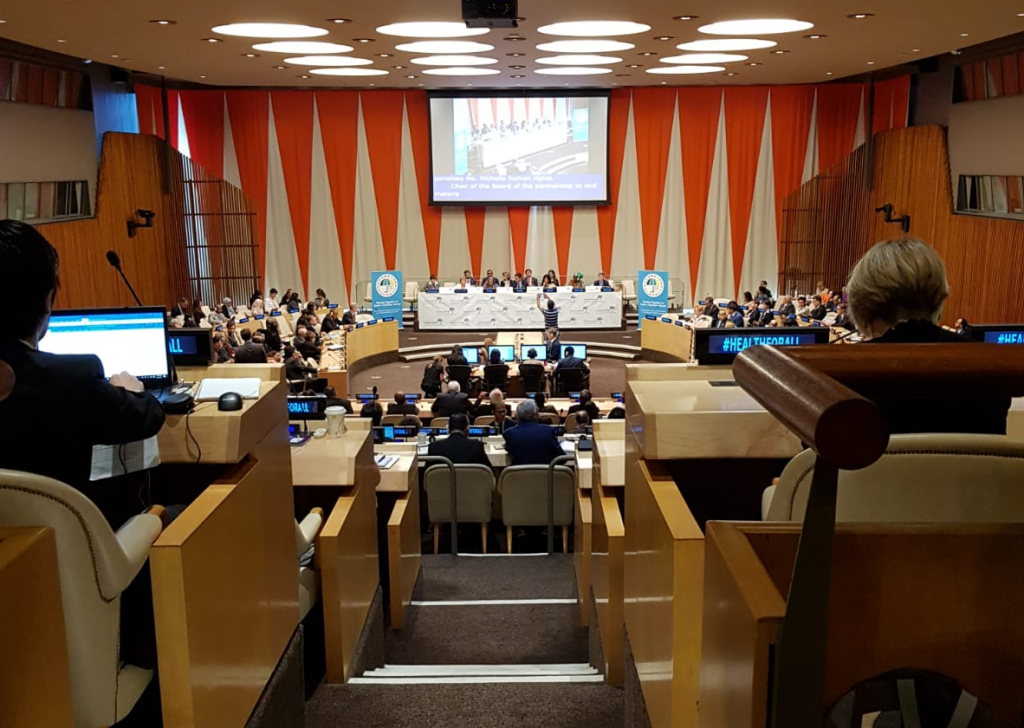 23 September 2019, New York – Today at a high-level meeting at the United Nations (UN) headquarters, UN Member States adopted a political declaration on universal health coverage (UHC) that includes mention of rare diseases. This marks a hugely significant milestone for the rare disease community, with rare diseases being included for the first time within a UN declaration adopted by all 193 Member States.

The United Nations Office of the High Commissioner for Human Rights (OHCHR) has made reference to persons living with a rare disease within its recently published annual report to the UN Economic and Social Council (ECOSOC). The 2019 report focuses on the topic of Universal Health Coverage (UHC), and looks at how the human rights framework can contribute to the conceptualization and implementation of UHC. 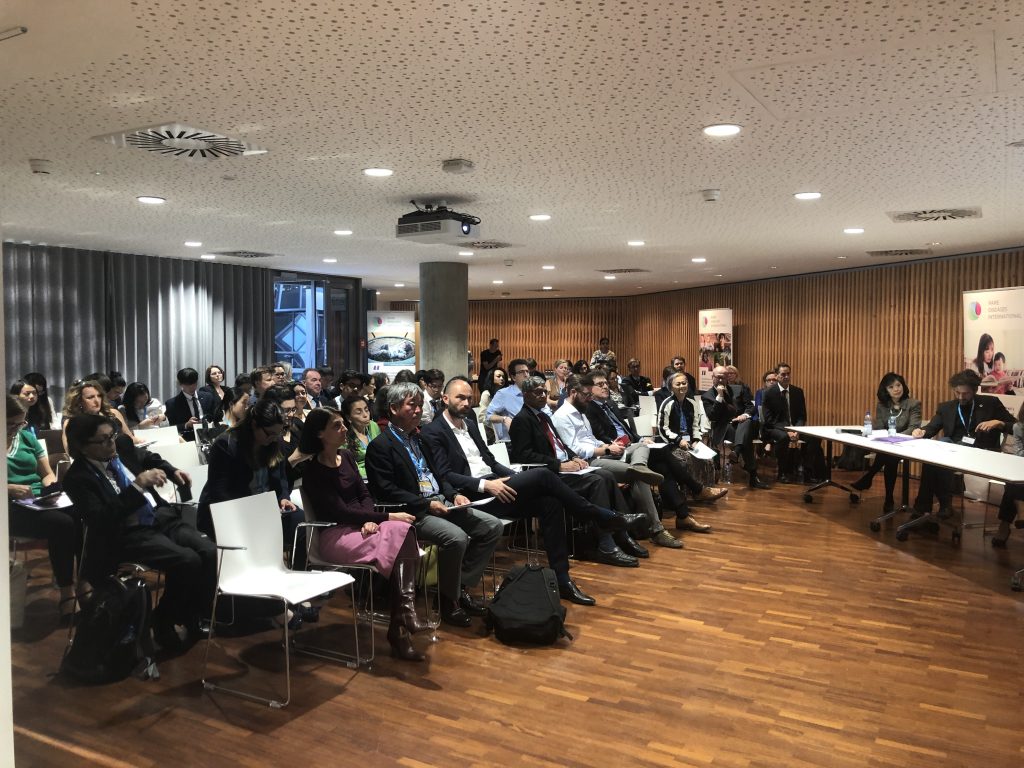 23 May 2019 marked a historic day for the rare diseases movement with rare diseases being featured on the agenda of the World Health Assembly (WHA) for the first time. Rare Diseases International (RDI), together with the NGO Committee for Rare Diseases, contributed towards formal and informal events which focused on the importance of including rare diseases to leave no one behind in Universal Health Coverage.

Find out more about these events.

Save the Date – Universal Health Coverage: Including Rare Diseases to leave no one behind 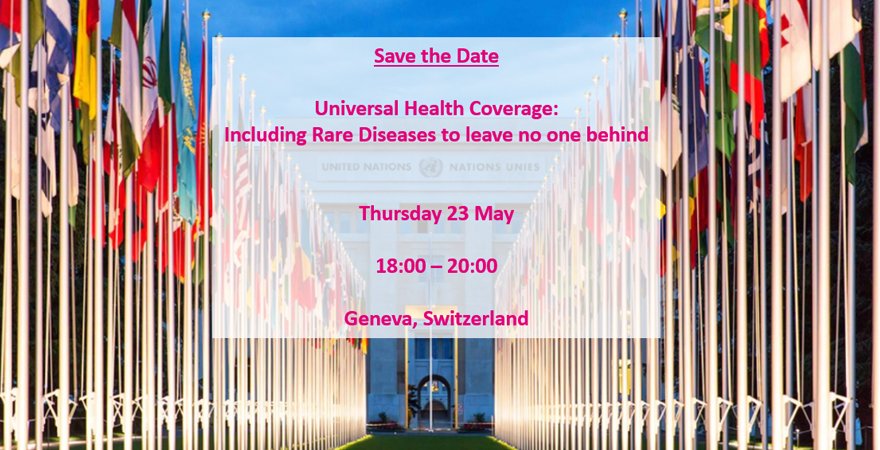 You are invited to attend the Rare Diseases International side event to the World Health Organization 72nd World Health Assembly.

This informal side event will serve to promote awareness and knowledge on the topic of rare diseases and to unite the international community, the patient community and all relevant stakeholders to address the unmet needs of this largely ignored and vulnerable population within Universal Health Coverage.

The event will start with a drinks reception followed by keynote addresses and a panel discussion. Delegates attending the WHA will have the opportunity to meet with patient advocates and other stakeholders from the rare disease community.

This is a free, open event, so please spread the word and extend this invitation to your friends and colleagues. Please note that RDI cannot offer financial aid to participants to attend this event.

Event by RDI in collaboration with the NGO Committee for Rare Diseases.

During this year’s Rare Disease Day 2019 Policy Event, held at the United Nations Headquarters in New York on Thursday 21st February, the NGO Committee for Rare Diseases launched a call for:

– The integration of rare diseases into the upcoming landmark UN political
declaration on universal health coverage (UHC), and
– A UN resolution on rare diseases.

Anders Olauson, Chair of the NGO Committee and Chairman of Ågrenska (Sweden), said, “We must ensure that the rights of people living with a rare disease are respected and that we are not discriminated against because patient population numbers seem small for each rare disease. In total, there are 6,700 rare diseases forming a community of over 300 million people.”

Yann Le Cam, Chief Executive Officer of EURORDIS, stated, “Today is a crucial step towards the integration of rare diseases into the upcoming UN political declaration on UHC and towards our end goal of a UN resolution on rare diseases. We call on the UN to adopt a resolution at the General Assembly that will formally make rare diseases a global priority, setting in motion a wave of policy actions that will ultimately improve the lives of the over 300 million people affected by rare diseases around the world, and in turn contributing to the achievement of the Sustainable Development Goals and the ambition to leave no one behind.”

Discussions at the event focusing on the need to integrate rare diseases into the upcoming landmark UN political declaration on UHC, due to be adopted at the first ever UN High-Level Meeting on UHC during the UN General Assembly in September 2019. To this end, the NGO Committee is supporting a new position paper from Rare Diseases International that will serve to meet this objective.

Ambassadors and officials from the Permanent Missions to the UN of Brazil, Estonia, France, Japan, Kuwait, Romania, Spain, Thailand, and the United Arab Emirates also gave official statements during the event.

In her report, presented to the Third Committee of the General Assembly of the United Nations (UN) on Monday 15th October 2018, Catalina Devandas, the UN Special Rapporteur on the rights of persons with disabilities, brings to the attention of the 73rd session of the General Assembly of the UN, that a “lack of accurate diagnosis and effective treatments for the majority of rare diseases represents a challenge worldwide”.

She also calls on states to “consider developing and implementing policies and practices targeting the most marginalized groups of persons with disabilities”, including rare diseases.

The mention to rare diseases in this report follows advocacy efforts from the NGO Committee of Rare Diseases including a contribution made to the report ahead of its publication.

In addition, representatives of the rare disease community were present at an Expert Group Meeting on the right of persons with disabilities to the highest attainable standard of physical and mental health in Geneva, Switzerland on 15-16 May 2018 hosted by the UN Special Rapporteur herself; as well as at the Conference of State Parties to the Convention on the Rights of Persons with Disabilities (CRPD) in New York, US on 12-14 June 2018 where an oral statement was issued in the name of the NGO Committee for Rare Diseases.

As NGOs with ECOSOC Consultative Status, Thalassaemia International Federation, the Agrenska Foundation, and the International Federation for Hydrocephalus and Spina Bifida – IF, submitted a statement to the 38th Session of the Human Rights Council (18 June – 6 July, Geneva) endorsing the messages laid out in the NGO Committee for Rare Diseases publication ‘The ‘Right to Health’ in Rare Diseases’.

The Official Written Statement reinstated how several of the challenges faced by persons with rare diseases intersect the main pillars of the “right to health” framework including Accessibility, Availability, Participation and Good Quality, meaning that rare diseases must be addressed as both a human rights and public health issue.

As a reminder, the ‘The ‘Right to Health’ in Rare Diseases’ was a contribution made by the NGO Committee for Rare Diseases in the context of the open consultation by the Office of the High Commissioner for Human Rights (OHCHR) for the “Report on the contributions of the right to health framework to the effective implementation and achievement of the health-related Sustainable Development Goals”. This report, which highlights the need to attend to the rights of “persons with disabilities and other populations and groups in vulnerable situations”, was presented by Ms. Kate Gilmore, UN Deputy High Commissioner for Human Rights, at the 38th Session of the Human Rights Council. The OHCHR received a high number of contributions to it, including the one on rare diseases, which can be found here.

On behalf of the NGO Committee for Rare Diseases, Clara Hervás, Public Affairs Junior Manager, EURORDIS-Rare Diseases Europe, delivered a statement at the Conference of State Parties to the Convention on the Rights of Persons with Disabilities at the United Nations (UN) in New York on Wednesday 13th June.

This conference, which is an annual gathering of stakeholders and signatory Member States, took place from 12 to 14 June at the UN Headquarters in New York under the overarching theme: ‘Leaving no one behind through the full implementation of the CRPD’.

The NGO Committee for Rare Diseases was among the few civil society representatives allowed to make a statement during the General Debate of the Conference. The statement called for the UN to ‘pay attention to the diversity within the community of people living with disability and ensure that people living with a rare disease across all regions of the world are not in fact left behind’ in the implementation of the Convention on the Rights of Persons with Disabilities.

Paloma Tejada, Director of Rare Diseases International (RDI), member organisation of the NGO Committee, delivered an official statement at the World Health Assembly of the World Health Organisation (WHO) in Geneva (Monday 21 to Friday 26 May). The statement is the product of a joint collaboration between the umbrella organisations that are members of the NGO Committee for Rare Diseases and a number of organisations holding the status of ‘special relations with the WHO’ (Thalassaemia International Federation, World Federation of Hemophilia, International Alliance of Patients’ Organizations and March of Dimes).

The statement is anchored to agenda item ‘11.7 Preparation for the third High-level Meeting of the General Assembly on the Prevention and Control of Non-communicable Diseases, to be held in 2018’. It calls on Member States to “not leave behind significant but often neglected rare diseases, each of which affect relatively small numbers of patients but collectively affect at least 300 million people globally”. Key messages of the statement include: to ACKNOWLEDGE the severity of the problem; to PROMOTE national strategies; to ADVOCATE for available and affordable medicines; and to DEVELOP synergies across borders.

Full article and video of the statement