Rare Diseases International (RDI), the NGO Committee for Rare Diseases, and EURORDIS-Rare Diseases Europe announced today that the UN General Assembly formally adopted a resolution recognising the over 300 million Persons Living with a Rare Disease (PLWRD) worldwide and their families. 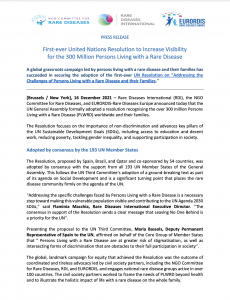 The event, which took place at the United Nations in New York on 21 February 2019, was organised by Rare Diseases International, EURORDIS-Rare Diseases Europe and Ågrenska to mark the occasion of Rare Disease Day. It brought together more than 100 participants from international civil society, UN agencies and national governments, research and academic institutions, and the private sector. The report provides an overview of the three key strategic outcomes of the event as well as detailing the next steps in advocacy towards the UN. 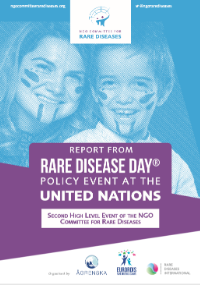 The “Right to Health” in Rare Diseases

Submission by the NGO Committee for Rare Diseases to the consultation opened to civil society by the Office of the High Commissioner for Human Rights (OHCHR) for its report on “contributions of the right to health framework to the effective implementation and achievement of the health-related Sustainable Development Goals”. This report was commissioned to the OHCHR through Resolution 35/23 of the Human Rights Council (June 2017) and is to be submitted by the OHCHR to the Human Rights Council at its thirty-eighth session, which is in June 2018. 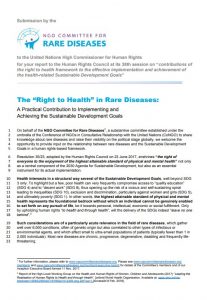 Submission by the NGO Committee for Rare Diseases to the consultation opened to civil society by the United Nations Special Rapporteur on the Rights of people with disabilities, Ms. Catalina Devandas-Aguilar, for its upcoming report on ‘the right of persons with disabilities to the highest attainable standard of health’. This report will be presented to the UN General Assembly in October 2018. 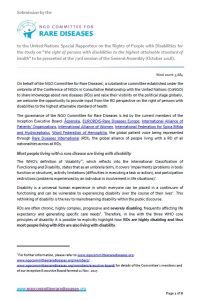 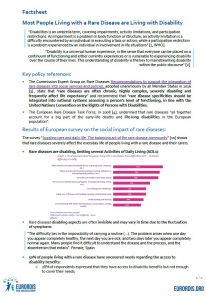 Report of the official inauguration of the NGO Committee for Rare Diseases at the United Nations Headquarters in New York, 11 November 2016.

With senior officials from the main United Nations agencies and bodies (WHO, UNICEF, UNDP, ECOSOC) and delegates from a number of sponsoring countries (Belgium, Estonia, France,  Malta, Sweden), the event served as a confirmation of the strategy established by the NGO Committee for Rare Diseases: demonstrating the link between the rare diseases community’s goals and the UN 2030 Agenda. 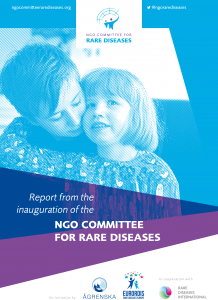 See details of the event here