The 17 SDGs will not be achieved without the activism of civil society.  While governments implement policy, they more often than not need the guidance, expertise and real-life evidence coming from patient organisations and NGOs to produce sound policies (Navid Hanif, Director of the Office for ECOSOC Support and Coordination at the launch).

For rare diseases, the most important role for these groups is two-fold:

» to press on governments to include rare diseases in their policies and in their budgets; and
» to take a system-strengthening approach by advocating to the global community as a whole on the issues people
living with a rare disease face.

A key success factor for the creation of this enabling environment is alignment between stakeholders. Various examples of success stories exist as a result of the common engagement of NGOs, particularly in the field of health. For instance, noncommunicable diseases were put to the fore following a six-year campaign and are now integral to all United Nations agencies’ programmes. Similarly, the International Diabetes Federation (IDF) led a campaign in 2006 and secured a UN resolution (61/225) after six months only, affirming diabetes as a major global health threat.

In order to achieve such progress for rare diseases, there are various fora and initiatives available to rare disease NGOs that are in consultative relationship with the United Nations, including those groups that are members of the NGO Committee for Rare Diseases: 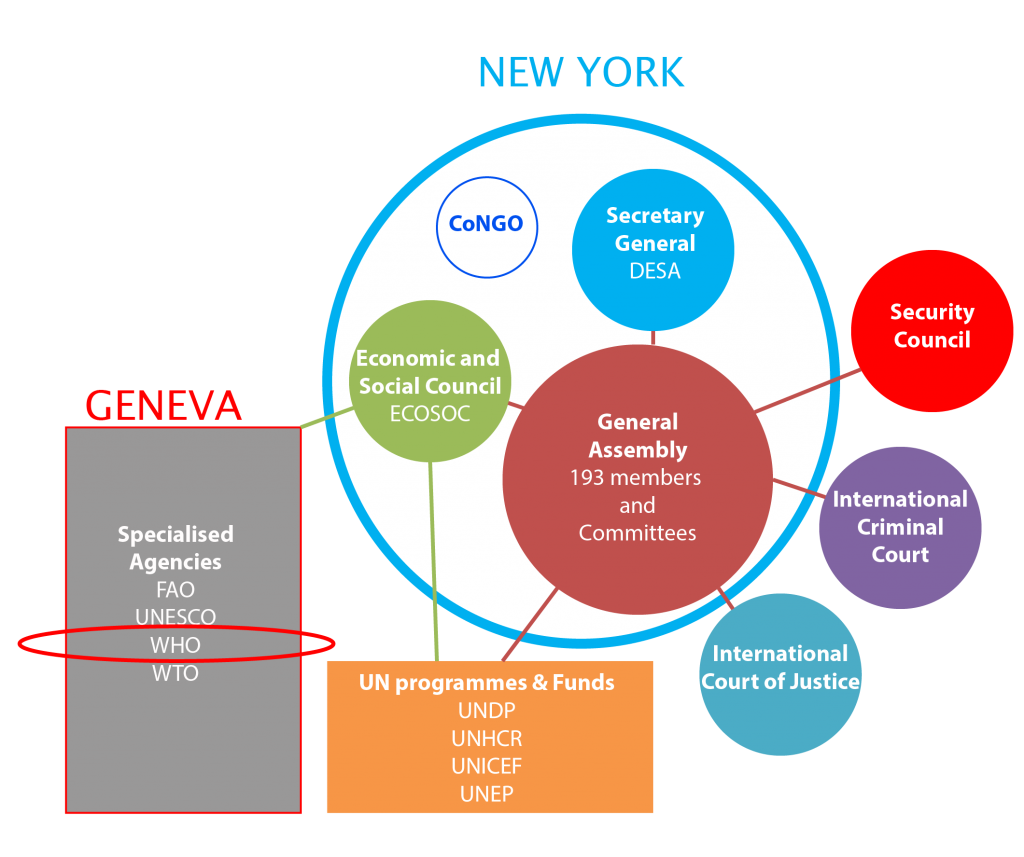 » The High-Level Political Forum (HLPF): this is United Nations’ central platform for the follow-up and review of the 2030 Agenda for Sustainable Development and the SDGs. The HLPF includes voluntary country reviews, thematic reviews on progress of SDGs as well as a range of side events that can be organised by major stakeholders like civil society.

» ECOSOC Partnerships Forum: Every year ECOSOC and other UN entities collaborate to bring together leaders from government, the private and non-profit sectors and civil society to discuss multi-stakeholder partnerships.

» The World Health Assembly: This is the decisionmaking body of the WHO and determines the policies of the organisation, appoints the Director-General and approves the proposed programme budget. There are also a number of side-events organised on the same days.

» The Human Rights Council: This is an inter-governmental body within the United Nations system made up of 47 States responsible for the promotion and protection of all human rights around the globe.

» Official International days: These can be a good opportunity for strong communication and advocacy campaigns such as Official WHO health days.

»The Commission for Social Development (CSocD):
This is the key UN body advising ECOSOC on social policies of a general character and, in particular, on all matters in the social field not covered by the specialised inter-governmental agencies.

» The UN Convention on the Rights of People with Disabilities (CRPD):
This is intended as a human rights instrument with an explicit social development dimension. As it adopts a broad categorization of persons with disabilities it is possible for the rare diseases community to employ this instrument in its advocacy where relevant and hold accountable those countries that are signatories.

»UN General Assembly Resolutions:
These are voted on by all member states of the UN in the General Assembly. They usually require a simple majority to pass. These are generally non-binding towards member states but they may act as soft law. Rare Diseases advocates can try to collaborate with governments to push for a resolution on Rare Diseases (particularly on Rare Disease Day as it was done for Diabetes). The opportunities for global action and global advocacy can be facilitated through closer collaboration with UN agencies and the introduction of rare diseases into their own programmes and advocacy. The end of the inauguration saw the presentation of the NGO Committee Founding Act, demonstrating the consensus of event participants that rare diseases are a global healthy priority